A downloadable game for Windows, macOS, and Linux

If you have the time, please read "onMasterSlaveAndGodotDevelopers" in txt or pdf formats

The eleventh in the award winning BINKY Series.

Amazing crossover action! From the mind of Sylvie an exciting new character has a cameo: BALL.

Amazing new character action! Introducing: EGGS. She is the egg baby of RUFF and BINKY (As seen in Bubbo Land: Egg Arc Part 7). For the first time ever play as someone other than the BINKY...

BINKY has rented a bouncy castle for their daughter. EGGS is having a very fun time bouncing around. Denizens of Bubbo Land join the excitement.

Included is EGGS 2D graphics, so she can be in new BINKY fangames, please refer to further instructions as listed in "Make Your Own BINKY". https://www.glorioustrainwrecks.com/node/11283

Ball by Sylvie Code assistance by Sylvie (BINK-CORP is not good with physics) Characters from Feng Shen Bang (Famicom), modified.

TECHNO1L.MID from The Games Factory

STRETCH1.WAV from The Games Factory

Mac: I compiled this in 2018 so I don't know how it will work on newer macintosh

I don't know if this is a good place to ask this, but I was wondering if Binky and Bubbo are actually separate characters? They are shown to be in a few of the games, including BINKY XI: Binky's Planned Party, BINKY I: Binky's House Party, and BINKY IX: BUBBO I. But in the Bubbo Land Egg Arc, Bubbo and Ruff are said to be the parents of Eggs, whereas this game's description states that Eggs is the child of Binky and Ruff, while also citing the Bubbo Land Egg Arc, implying that Bubbo and Binky are the same character, even though the games seems to contradict that.

On an unrelated note, do BINKY: XVIII and BINKY:XX exist? I couldn't find them. Thanks.

BINKY and BUBBO are the same. At first they were called Bubbo but then I kind of forgot and decided to call them Binky. The Bubbo in Binky's Planned Party was sort of an unused content sprite and I thought it would be funny to put it in there. And yet in the information of the gaiden games I write that

What is a gaiden? Is it a spinoff? Is it not "cannon"? What is "cannon" anyway, something pirate ships use?

So perhaps mulling over the BINKY-BUBBO duality is a futile effort, and an itch io comment is no place to discuss the idea of canon in regards to literary theory, religious studies etc.

BINKY XVIII is BINKY XVIII: BUBBO II: Clash at GaalB'or
it is coming soon. You can follow updates on my twitter
BINKY XX is unfortunately in limbo.

Thanks a lot for answering my question. I'll keep an eye on your twitter :) 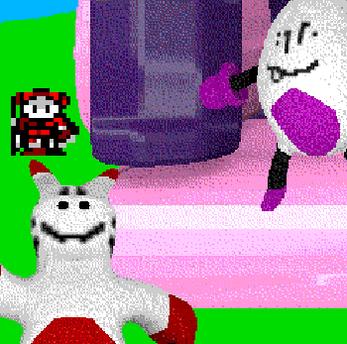