A downloadable game for Windows, macOS, and Linux

If you have the time, please read "onMasterSlaveAndGodotDevelopers" in txt or pdf formats

The twenty-second in the award winning BINKY series!

The year is 2068 BC (BUBBO-LAND CALENDAR). Things have changed. Ronaldo McDonaldo has seized the desert-continent, and populates it with a peppering of burgers and fortresses. He is an angry tyrant, whom none can oppose. The hero, BINKY, rides their trusty steed, SUPER-CAR, to defeat Ronaldo McDonaldo's minions...

This is the story of THE LAST HAPPY MEAL.

Hamburglar from Crum: Asset Pack for Marek & Co by Everythingstaken

Artwork from Quest for Glory 2: Trial By Fire

Photograph of Grand Canyon by @bumblebees95

Overworld from Legend of Zelda: Wand of Gamelon

STRETCH1 from The Games Factory

sound from the Wacky Adventures of Ronald McDonald

Mac: I compiled this in 2019 so I don't know how it will work on newer macintosh 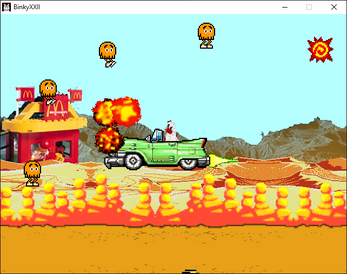